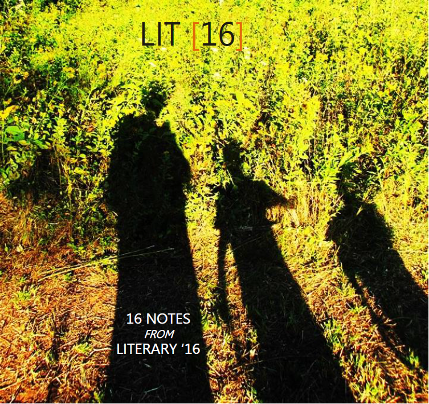 [1] This Gladdening Light: An Ecology of Fatherhood and Faith | This book doesn’t really belong to a particular year. I started writing it—not knowing I was writing it—in 2009, and it won the Will D. Campbell Award in Creative Nonfiction in 2015. Mercer University Press officially announced its publication in December 2015—which means that 2016, with the wonderful guidance of the folks at MUP, was devoted to editing and publication prep. My literary work in 2016 was in many ways defined by this book. It will be in the next MUP catalog, and will officially be out in the world in July. It features lovely cover art by Scott Neely, with kind words from Janisse Ray, Anthony Grooms, Erik Reece, and Cristina Martin. I can’t wait to share it with you. If you’ve got a literary festival or reading series or something like that going on and need an author, give me a holler.

[2] “Of War and the Red-tailed Hawk” | I started writing this essay in 2015 alongside my students at the Appalachian Writers Workshop and finished it earlier this year alongside my students at Georgia Highlands College.  I’m honored that Sonja Livingston named it a Judge’s Choice in Still: The Journal’s 2016 Literary Contest, just as I’m honored that Still published it. It’s the newest essay that will be included in This Gladdening Light—I added it in the editing process.

[3] “Jesus Year” | 2016 marked the end of my “Jesus Year” when I went from 33 to 34 in November. This poem, published at Fourth River, is kind of about that. And chiggers. The photo at the top of this list—the three shadows, my kids and me in a meadow by Allatoona Creek—accompanied the poem. The Fourth River website isn’t functioning at the moment, so here’s the poem:

I would’ve never believed, here and now at 33,
I’d be sitting in this rust-stained tub, soaking in vinegar
to relieve chigger bites speckling my legs, wounds
amassed the other night walking a meadow
along Allatoona Creek with my children.
Seeking barred owls and bats on a ranger-led hike,
we found none of the former, a few of the latter,
and plenty of what I never saw coming,
creatures inching along grass blades and weeds,
clinging to my leg hairs despite all precautions—
bug spray, tall socks, failed attempts
to not brush against the green, knowing
they were likely there, unseen. In my sleep,
they burrowed beneath my skin,
forced up the blisters that have led me here,
this day, to this acidic water, that have left me
worrying over all I did wrong on our walk,
over all I could’ve prevented, reflecting
on all I might take from this pain
for the next time we go.

[4] Decatur Book Fest | I’ve been fortunate to read at DBF’s Local Poetry Stage for the past three years or so. This year’s set was arguably my favorite. It was cool to read with fellow Owls Jenny Sadre-Orafai, Valerie Smith, and Kandace James, all orchestrated by Tony Grooms. I read an unpublished poem called “My Daughter Refuses to Smile.” It worked. 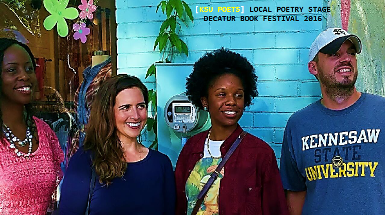 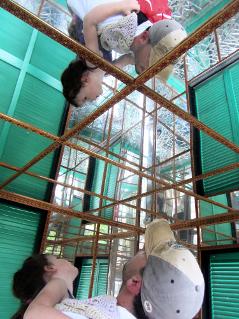 [5] “At Paradise Garden” | The Reverend Howard Finster and his Paradise Garden, thanks to R.E.M., have been part of my personal mythology for a long time now. I finally visited Paradise Garden for the first time earlier this summer with Deana and Opal, and this poem, published by Thrush not much later, was the result. This is the third time Thrush has published my work, and as with Still, I’m so grateful for their support.

[6] Two anthology publications | I was fortunate to have three poems included in two anthologies this past year: “Visiting Wildman’s Civil War Surplus and Herb Shop” and “Parable of the Carolina Chickadee” appear in Hard Lines: Rough South Poetry (University of South Carolina Press, edited by William Wright and Daniel Cross Turner), and “Parable of the Red-tailed Hawks” appears in The World is Charged: Poetics Engagements with Gerard Manley Hopkins (Clemson University Press, edited by William Wright and Daniel Westover). Check out this Hard Lines review by Paige Sullivan at Grist. 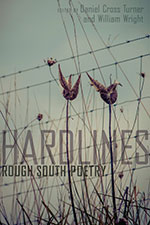 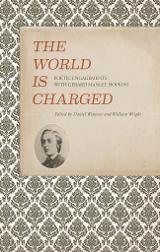 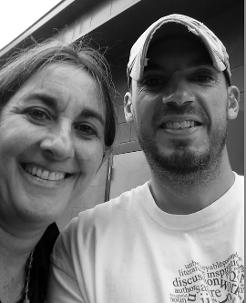 [7] Allatoona Book Fest | While I wasn't able to do as much as I would’ve liked, I’m proud to have had a role in making Acworth’s first ever literary festival a reality, from writing most of the grant for the festival to scheduling and introducing keynote Janisse Ray. I still can’t get over the fact that one of my heroes headlined a literary festival in my hometown. I’m also honored to have been invited to participate in a panel on ecopoetics by the Atlanta Women’s Poetry Collective, along with Janisse Ray, Sandra Meek, and Sally Stewart Mohney, moderated by Amy Pence. A workshop led by Amy Pence and Alice Teeter was my favorite part of the festival. Stay tuned to Acworth Cultural Arts Center for information on future events like this.

[8] Sophomore McSweeney’s effort: “Welcome to Our University! We’re Delighted to Have You, but If You Think We’re Going to Cancel the Ku Klux Klan Rally, You’ve Got Another Think Coming” | It was hard to follow “Everybody’s Invited to My All-Male, All-White Literary Panel,” my McSweeney’s 2015 debut, but I did (on a topic that still pisses me off), all the while resurrecting a character from the debut. This is a piece against the University of Chicago letter, sure, but it’s also aimed at the forces that caused the 2016 election to play out the way it did, which is also true of “All-Male, All-White Panel.” These pieces are twins, in a sense, and the literary scene and academia are only part of the surface.

[9] Atlanta Banana trifecta: “Sarah Palin Endorses Pile of Dog Shit for President” (January), “I Published a Fascist Pamphlet, That’s All!” (January), and “Listen Here, Little Shits, I am a Glyptodon!” (April) | Atlanta Banana has been good to me. They’ve published seven of my satirical/humor pieces, all told, including two of the most fun pieces I’ve ever written—one about a fantasy about smashing Halloween décor through a window, and another about R.E.M. coaching UGA football. Mike Mills, if you know who that is, tweeted about the latter. (R.E.M. is not coaching a major conference football team, turns out.) But as to these three pieces from 2016: “Glyptodon” is a personal favorite. It was inspired by an actual cast of a glyptodon skeleton on display at Tellus Science Museum in Cartersville, GA. I was there one day with the kids, and the glyptodon started talking. It gave me the title at the very least, I swear. “Fascist Pamphlet” is a riff on men publishing abusive shit and passing it off under the self-important guises of “Poetry” and “Art.” “Dog Shit,” I’m not so sure about that one anymore. I stand by the insult, but my piece might’ve been too easy, and it is the product of a small window—or a fairly large one, truth be told—where a Donald Trump presidency was a punchline. If you dig deep (pardon that metaphor), you might see this piece is really poking fun at the absurd idea that someone like Ted Cruz was the sensible alternative to Trump. But it also depends on easy laughs like Oh, that Sarah Palin! or A Trump presidency, hahahaha! And there’s nothing funny about that and never has been. Knowing what I know now, I’d let the attempted nuance in the practically nonexistent Trump/Cruz distinction go and would never have written this piece. But he remains a shitty person upheld by a shittier ideology, so I guess the piece does have that, at least. 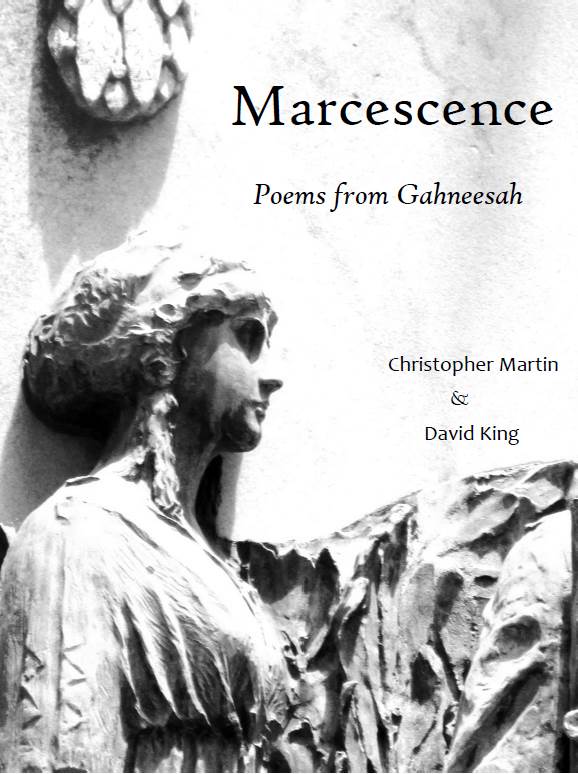 [11] Bridge 8 reading | In May, I got to read at Georgia Center for the Book along with Julie Bloemeke and Travis Wayne Denton to mark the publication of the spring issue of Bridge 8. My poem “Catching Salamanders at Indian Grave Gap” was selected by Laura McCullough to appear in the issue. Editor Jared Rypkema traveled all the way from Florida to be at the event. 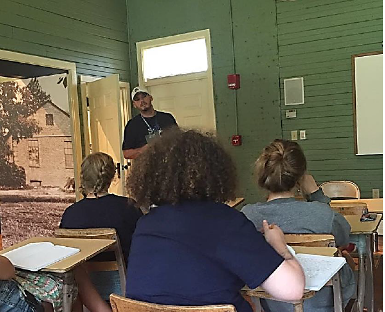 [14] Appalachian Young Writers Workshop | June 2016 marked my third summer teaching creative nonfiction at AYWW. This is always one of my favorite weeks of the year. One of the highlights, and one of the most humbling moments of my life, was getting to lead a creative nonfiction workshop on race, social justice, and healing in the classroom of a formerly segregated elementary school in Clinton, TN, now the Green McAdoo Cultural Center. The photo at left, taken by AYWW co-director Langston Wilkins, is from that moment. I’m honored to be part of the AYWW family and so proud of our students.

[15] First #instapoem | I caught up to 2017 before it started by finally getting on Instagram. I posted my first #instapoem, “Sandhill Cranes: Christmas Morning,” shortly after. I wrote this poem over the 2015 Christmas holidays as a reaction to the right-wing political Christian response to the Syrian refugee crisis, but of course it’s just as applicable to xenophobia, racism, and general callousness at the heart of this political season, harnessed and embraced by our president-elect. It’s a Christmas meditation against walls in all forms. You can read it by following me at Instagram, @christopherbmartin22. More #instapoems coming there soon. 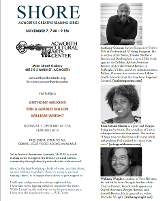 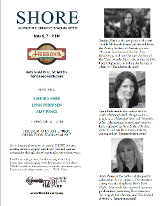 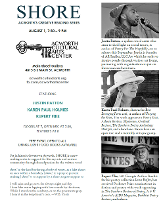 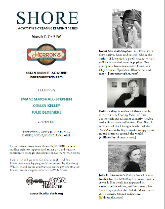 [16] SHORE | 2016 was the year of SHORE, a monthly creative reading series I started, organized, and hosted through the Acworth Cultural Arts Center. At three featured authors per month—from poets to playwrights, novelists to memoirists—along with our open mic readers and audience members, there’s no way I can mention everyone who made this series special here. But thank you—I couldn’t have done it without you. Stay tuned to the Acworth Cultural Arts Center for more on where the series goes from here. We’re currently on a holiday break, but will be back soon in some form.