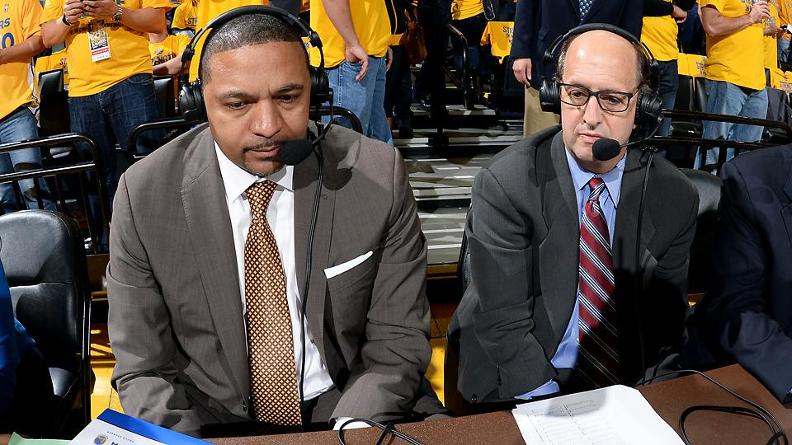 “Understand what I’m saying when I say this,” Jackson said during the national telecast. “White players are hurting the game. And what I mean by that is that I go into these high school gyms, I watch these kids, and the first thing they do is they run to the three-point line like a white role-player. You are not a white role-player. Work on the other aspects of the game.”

League and network affiliate sources confirm this is not the first time Jackson, himself a former coach and player in the NBA, has made a controversial statement like this. In fact, Jackson said almost the exact same thing during the very same broadcast about reigning MVP Stephen Curry, though his statement about white role-players rings a bit truer according to game experts.

“I totally agree, Mark. These shots white role-players take, if some high school joker takes shots like that, and it’s allowed by their coach, shame on them,” said commentator Jeff Van Gundy, responding to Jackson’s statement.

At a press conference following the last game of the evening, several white role-players of the league took Jackson’s comments in stride.

“I get what Mark is saying, for sure,” said one white role-player known for his ability to make three-pointers at odd intervals of the game with precious little playing time. “Kids can’t just skip all the hard work and practice and expect to come off the bench every three or four games to hit a three when called upon. No hard feelings at all.”

“Well, I think Mark is just upset he didn’t utilize me to my fullest potential back when he was coaching,” said another white three-point specialist who played limited minutes for Jackson when he headed Golden State. “But he had a ton of other much more reliable and versatile options, so I understand what he meant. I just wish he would’ve phrased it a little differently. I get that all I can really do is shoot when left wide open, but to hear a former coach say it, well, it hurts a little.”

“Look, this is just a media spectacle,” said yet another white man whose sole athletic ability is to accurately shoot a basketball from long range only when utterly necessary. “At the end of the day, I agree with Mark. With all the basketball talent in this country let alone the entire world — hell, you name any county in my home state of Georgia and I guaran-damn-tee you you’d find two or three basketball players who are more well-rounded and much more athletic than me who shoot pretty much just as well — it’s true that white role-playing long-range shooters are hurting the game. You bet.”

Our analysts confirm that, oddly, Jackson’s comments about how they’re ruining the game only pertained to the one thing white role-players routinely excel at in the NBA, rather than aspects of the game they tend to perform miserably and stereotypically, such as mid-range shooting, dunking, ball-handling, passing, rebounding, defense, and basketball.

Editor’s note: At press time, reliable inside sources have informed us that white role-players in the NBA excel not only at long-range shooting, but also at committing fouls in strange ways to extend games — by jumping on the backs of relatively poor free-throw shooters, for example. We will have to check the tape to confirm.

BACK TO SUBURBAN BEET