What is important in the child is his primal utterance, his response to being, his own free cries and signs, his admiration.
—Thomas Merton

I hear the sound I love, the sound of the human voice…
—Walt Whitman

In the beginning was the electric noise of a sonogram, a hum fluttering in my ears, drowning out all else, not from decibel force, not from loudness, but from its soft yet demanding call to listen: the kind of call that attends the murmur of half-sleep, the momentary vibrations of moth wings on a windowpane, the embracing and pulsating silence beneath a still river pool surrounded by rapids and falls, echoing granite. The nurse told us that was our child’s heartbeat.

Months later we hung ornaments from the door frames, twelve little stained glass disks, each depicting one of the twelve days of Christmas. My wife was grumpy and uncomfortable but still she hung them carefully, ritually.  The ornaments from her childhood dangled from multi-colored thumbtacks and spun in dim light.

Our families were on their way for Christmas Eve supper. I was putting together last-minute gifts as they arrived: reindeer made of logs from the backyard, branches for antlers, sweet gum balls nailed down for noses, using the washing machine and dryer as sawhorses. I’d seen someone selling these ornamental reindeer for $25 each at a roadside stand and figured I could make them myself. I cut into one of the logs and termites poured from their hollow abode onto the floor. I swept them from mudroom into the cold yard.

Soon our house was full—brothers, sisters, parents, in-laws, dogs. Deana got hot and set the thermostat low and soon people complained of being cold. I put on long sleeves and those who were the coldest retrieved their jackets.
My brother-in-law took a phone call and held the top of the hallway door frame as he spoke. “No, no, not labor yet, just little contractions,” he said into the phone. He knocked down the ornament with a picture of a maid-a-milking and it shattered on the wood floor. Deana glared at him and turned the heat down one more notch. I poured myself a couple beers into a tall handmade stein that I bring out for special occasions. And this certainly was one: Christmas Eve, my son on the way. A New Year’s birthday, maybe.

Deana glared at me, too. In retrospect, she knew, or at least had a strong feeling, that I’d be driving later, through the rain, to the hospital. But the way I saw it, the Braxton Hicks contractions had been going on for several days; what was to say they would not go on for several more? I swigged my beer, sat back in my chair, and thought what a pleasant Christmas Eve it was.

Everyone left after supper, except for my in-laws who were staying with us through the holidays, and things got a little quieter. I was sitting in the dining room having one last beer with my brother-in-law when I heard the moaning down the hall. It was rather awkward sitting there with my brother-in-law at that moment, his sister’s early labor moans reverberating through the house. He’d told me earlier in Deana’s pregnancy that since Deana was pregnant, he knew I’d had sex with her, but he was okay with it. And so the beer helped.

Deana was sitting at the edge of our bed, still moaning, grimacing, holding her back with one hand and her belly with the other, rocking back and forth as I entered our room. This was no false labor contraction. I stood beside her, asked what I could do to help, and put my hand on her shoulder; she swatted it away. I waited. The contraction passed.

Our two dogs, both rescue mutts, followed at my heels. They whined and jumped on the bed beside Deana; Daisy sniffed her belly, Gracie licked her face, and both looked at me as though I knew what to do. On my way back to the kitchen to microwave a tube sock full of uncooked rice to put on Deana’s back, I told my brother-in-law that it looked like my son would have at least one thing in common with Jesus. And I assumed he knew I was referring to a shared birthday and not to an immaculate conception.

We started timing the contractions at about 10:00 and I logged them all on the back inside cover of What to Expect When You’re Expecting in scribbles that now seem hieroglyphic. Between contractions I rubbed Deana’s back and held the hot rice sock to it; during the contractions I pressed her lower back to counteract some of her pressure and pain—pain that the King James Bible calls “sorrow”—offering my arms and hands for her to brace herself. She clenched my arms and leaned forward as the contractions came, our dogs keeping watch between us. On my next trip to the kitchen to warm up the rice sock, I realized that everyone in the house was awake, sitting, listening, waiting.

At 2 AM, after a call to the hospital midwife, I threw some clothes in a bag and led Deana out into the cold rain and darkness of Christmas morning, her parents behind us, loading up their own car, my brother-in-law staying behind to watch the dogs. In the rearview mirror I watched as my father-in-law slipped on the soaked grass and slid down the hill to the street. After a few seconds he stood, his jeans and plaid shirt slicked in mud. I asked Deana if we should wait and she groaned and told me to go. And so I went.

Out on the interstate, the rain picked up and red lights flared and yellow lights shimmered and industrial wire Christmas trees shone blue and white from the tops of buildings. I called my parents and sisters and when I used the phrase “I’m fairly certain she’s in labor,” Deana yelled at me to hang up and drive. I hung up and drove, silence on the great highway but for tires treading wet asphalt, but for the cries of a lovely and hurting woman full of life, of life and sorrow, of sorrow and joy—of joy, somehow, unaccounted for.

“In the massed crowd,” wrote Thomas Merton in a Christmas reflection called “The Time of the End is the Time of No Room,”

…there are always new tidings of joy and disaster. Where each new announcement is the greatest of announcements, where every day’s disaster is beyond compare, every day’s danger demands the ultimate sacrifice, all news and all judgment is reduced to zero. News becomes merely a new noise in the mind, briefly replacing the noise that went before it and yielding to the noise that comes after it, so that eventually everything blends into the same monotonous and meaningless rumor. News? There is so much news that there is no room left for the true tidings, the ‘Good News,’ The Great Joy.
Hence, The Great Joy is announced, after all, in silence, loneliness and darkness…

In silence we entered the hospital and signed the papers and a kind nurse working such an awful shift that frigid Christmas morning checked us into a room and said the midwife on call was on her way. She told us that many of the mothers-to-be there had for some reason scheduled C-sections for Christmas morning, but that one poor woman had delivered her baby shortly after midnight in her car in the hospital parking lot.

Sin, the dogma goes, is our inheritance from Adam. We are born into that inheritance, and so in that sense it is “original.” We have only to enter the world, to float the channels of a natural process, and we are in sin, stained by it from infancy on.

I held a small trash can for Deana as she threw up, wiped the bile from her face and gown when she finished, and got her a bucket of ice chips. She wanted to have our son as naturally as is possible in a hospital, and so she pushed and labored for three hours after we arrived, the midwife holding one of her legs, me holding the other.

The midwife and the nurses whispered to each other, spoke in the hall. At about 5 AM, they gave Deana an epidural. She shook, shivered, and cried. A couple hours later, she started pushing again, threw up several times more as she was pushing, and the midwife told us the baby was not descending. Deana pushed until about 9:00 when the midwife said the baby still had not moved and that a C-section was needed to prevent an emergency, that our son’s lungs were filling with amniotic fluid and meconium, that he was simply not going to come out on his own.

The nurses turned up Deana’s epidural and pricked her with a needle until the anesthesiologist was convinced she was numb to the chest, and they gave me a set of blue scrubs.

“We are human,” wrote Thomas Merton, “and the only thing stopping us from living humanly is our own deeply ingrained habit of delusion, a habit which some of us stubbornly continue to associate with original sin.”

We are human. Deana was crying when I joined her in the operating room. I sat in a swivel chair by the table and held her hand and touched her face. Condensation and snot from my own tears clung to the inside of the surgical mask they’d given me.

The white antiseptic room, the silver steel machines, the failure to descend, pelvis too small, the curtain before the blood, lights above her wound, the time of the end, the time of no room. “Daddy, stand and see your boy.”

I stood and looked over the curtain and saw them take him from her. They lifted him from the dark, from the sunrise and rain of the early morning, from burned and cut veins, cushion of organs. He was cold and trembling. She asked me what he looked like and I was trembling, too. I just said “He’s beautiful” but that did not account for it all.

Cannon was silent, not breathing, blue as a heron feather, though I did not tell Deana. I did not tell her that he looked to be gasping as I stood, holding her hand, watching the doctors laying him onto a table, placing a suction over his mouth. I went to him and took his hand and he held my thumb. The doctor turned on the machine. Some meconium rose but most did not and there was still no sound.

A few more times. A few more silences. And then he cried.

“Shoulder your duds dear son, and I will mine,” sang Whitman, “and let us hasten forth… Long enough have you dream’d contemptible dreams, / Now I wash the gum from your eyes, / You must habit yourself to the dazzle of the light and of every moment of your life.” Hay and oxen, holy lights, cold and damp, visitations. I lost what little belief I still had in original sin that day.
I lost belief, too, lost it for being, for the reality and presence of the sorrow, the blood, the blue, the mother, the boy. He cried and that was a voice calling. He cried and that was the first sound I really heard. 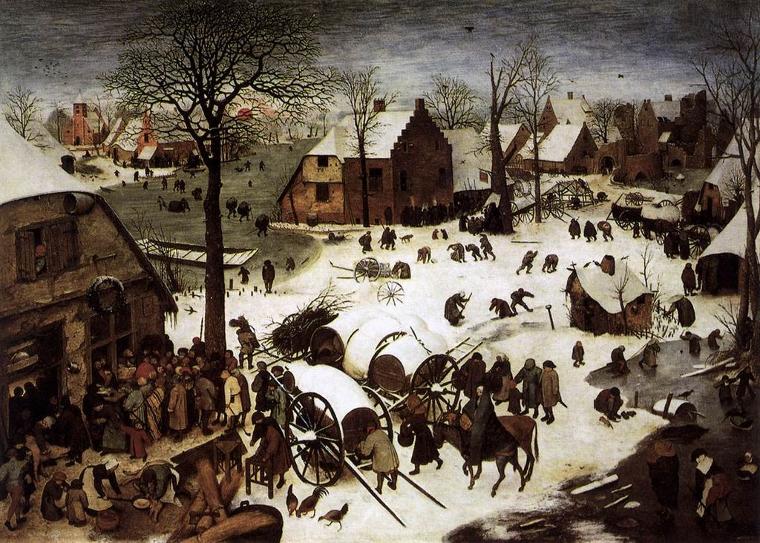 Background image: Pieter Bruegel the Elder, The Census at Bethlehem (oil on panel, 1566)